The kettle valley adventure was a success. The scenery was gorgeous and cadenza performed beautifully. Things also went epic with heavy helpings of gnar.

After a (Saturday) morning of faff delivering cars to their needed end points, we left Midway shortly past noon. Our carriageless horses did their best to transmute our willpower into forward velocity along the old Kettle Valley Railway running north from that small Kootenay town. Our team of seven had bikes loaded with camping gear and we began the uphill trek out of town. The somewhat rough terrain was at times a bit bone jarring, but that discomfort was paltry compared with what was to come. 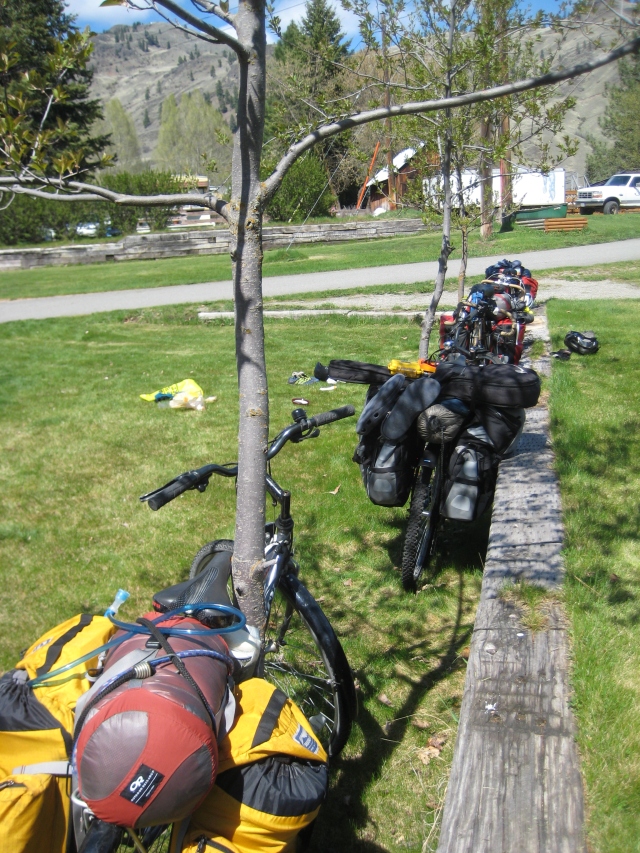 We encountered four notable trials on the first day. A rogue calf decided to chase us earning our group the wrath of mum plus her backup team of one bajillion angry cows. 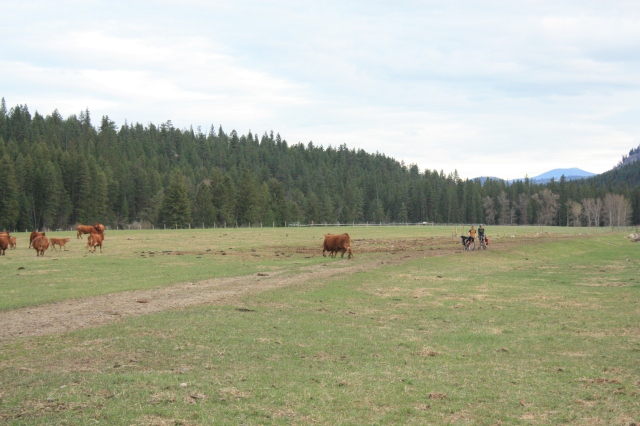 Cow and calf finally moving away as Len and I try to look non-threatening. He and I each weigh about 105 lbs soaking wet – so that helped our cause.

Almost out of cow range, we were faced with an electric fence that required careful and high risk negotiation. Everything from limbo to high jump was considered and all peeing was suspended for a time. 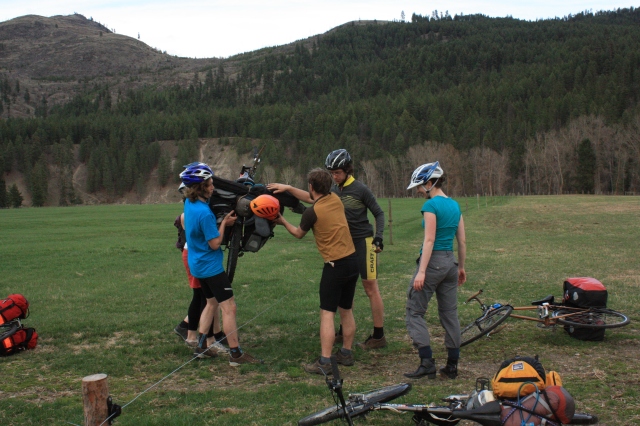 passing a bicycle over the electric fence

Not 50 m past the fence, we came to a river crossing with two large culverts whose capacity had been well exceeded. We removed our shoes and socks and began the process of fording our gear across the frigid waters while cows mooed in anger at our continued proximity. 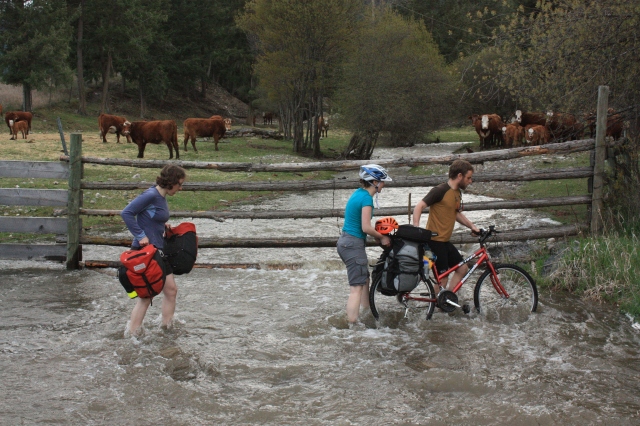 We were rewarded for our trouble with a well groomed trail. That groomage was interrupted only once by a chasm requiring an assembly line-style mad scramble in the gravel to pass our bikes across. 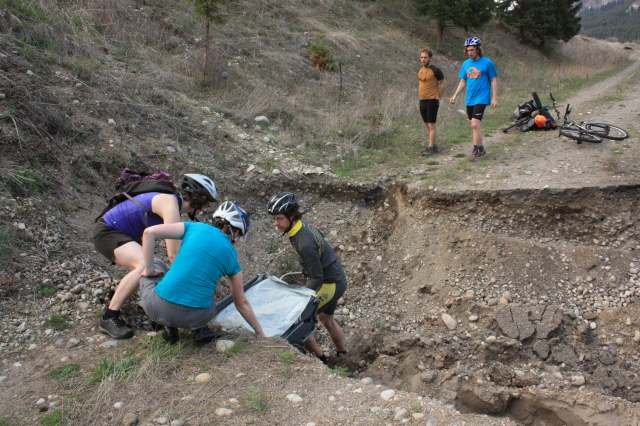 We slept the first night in Rhone at the old caboose run by an 89 year old Paul. His friendliness exceeds all expectations and cannot be properly captured in words. He was both surprised and enthusiastic to have his first visitors of the year (of about 2000 per year). There are photos of him in all the area guidebooks.

Sunday morning we set off amidst warnings of snow ahead. We were deafened by our enthusiasm. A few kilometers down the road we pulled in to stock up on fresh water at the campground. The owner, George, showed us rad tree ring samples he had cut from the area and gave us an education in forest management. Also a rogue lamb walked in while we were there. We got back on the railbed and quickly noticed we were following two sets of bear prints – one small and one large. Our noise level increased dramatically as a precautionary measure. Despite the racket we made, we were quickly joined on the path by two moose calves. We gave them lots of space lest mum come back. Shortly thereafter we had two deer cross in front of us (mother and fawn). We had the bear tracks with us for at least 10 km (travelling the same way as us within the past 24 hrs) but were fortunate enough to avoid that contact. At one point a coyote darted in front of us.

Somewhere along the way, a shout went out that one of the bikes had endured a catastrophe. It seems the lock nut on the freewheel (the bit that lets the rear wheel spin when you are not pedaling) had come loose and spilled all its bearings onto the trail. We were able to find two of the required seventy eight 1/8″ bearings. With no other meaningful options, we improvised a solution. We tore thin strips of cotton and twisted them up. After being soaked in chain oil, we jammed them into the bearing compartment and sealed it all back up. It had a bit more friction than normal but the cotton bearings worked rather well!

Rozzy holds her two remaining ball bearings while Tess holds the rear gears and I start stuffing cotton. Note the look of confidence.

Just as we neared our camp spot for the night, Arlington Lakes, we found the snow that had been talked about. We had to haul our bikes through a 100 m section but then we were clear on into the campsite. The lakes were a beautiful frozen vista. 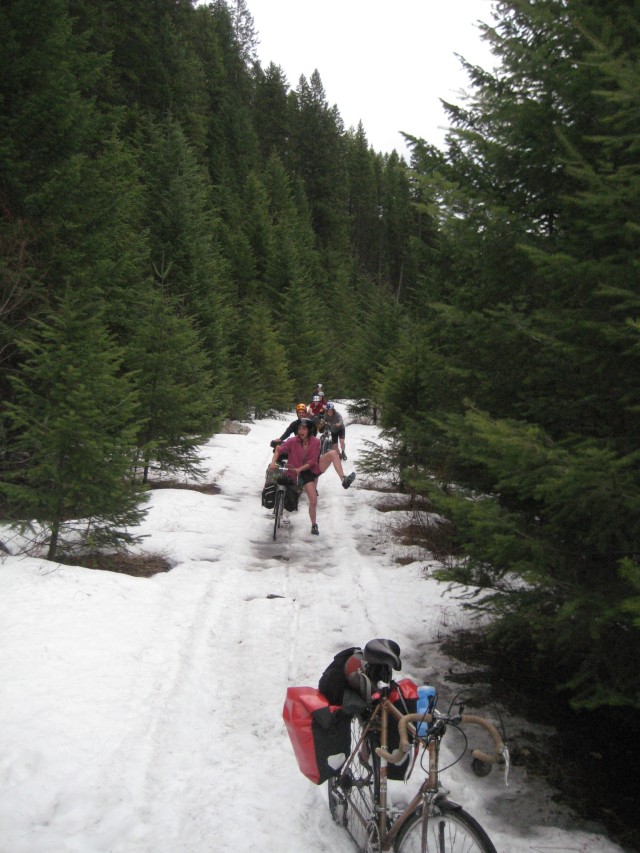 My Cadenza parked in a snowy patch as the team approaches

Monday was not supposed to be a “trip” day for me. Monday was supposed to be a quick jaunt to the car and then back to Vancouver for an afternoon at UBC. That was not in store for me. The intermittent snow was so prolific that it took us about 6 hours to do 15 kilometers. Just past the midpoint of our journey that day, we had a rear derailleur (the thing that does gear changing in the back) snap requiring more down time while we converted that bicycle into a single speed. It was a slow cold day.

Sizing the chain for some single speed action

We eventually made it to the car we had dropped. The return to Vancouver was long after such a tiring day (necessitating a nap at a rest stop in order to maintain lucidity). At one point in the night there was snow so vicious that the road limits were defined by the rumble strips. I made it home around 4 am. Time in the sauna the next morning was thoroughly enjoyed by me. 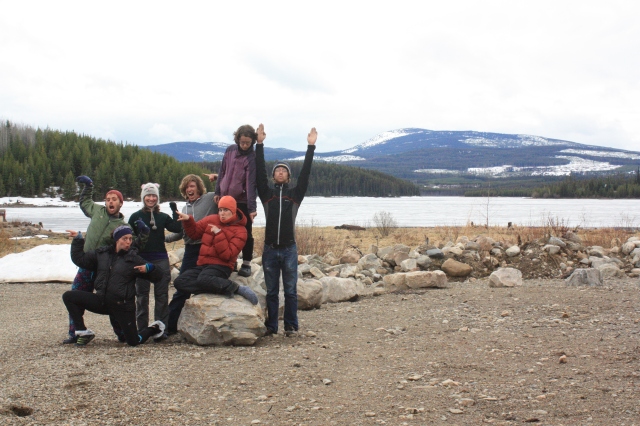 I look forward to revisiting the Kettle Valley Railway in the summer.