May the fours be with you

This weekend a group of four of us set out into Tetrahedron Park.

Saturday morning Miki, Tess, Katherine (of Midrand, not Katherine of Ontarioville) and I awoke in Pender Harbour on the Sunshine Coast. The morning began with a skinny dip in Garden Bay Lake. As is well known, this is the best way to wake up.

The four of us then drove down to Sechelt, forty four kilometers away, and began our ascent into the park.

Our first stop was unplanned. The road recommended four wheel drive. Miki’s car did not have this, although it did have four wheel stopping power.

We got a flat tyre. After removing the flat and putting on the rather tiny looking spare we were now left with only four useable tyres! No spares left! 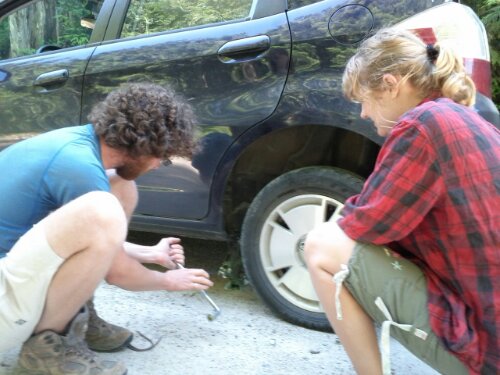 As soon as we arrived at Edwards Lake the clothes dropped off and we were all in the water. As is well known, skinny dipping is the best way to take an early-afternoon break.

Then we had to ford some rivers.

As is well known, skinny dipping is the best way to take a mid-afternoon break. We did that in Chapman Lake. That was probably the most important skinny dip because right before it we were lost for something like two hours. Anticipation of the swim was key to the patience required for us to find a good path through the bog. After some ado we reached McNair Cabin.

After dinner we walked down to McNair Lake, our fourth of the day. I won’t tell what we did there.

This entry was posted in Adventures and tagged four, Katherine, Miki, Tess, Tetrahedron. Bookmark the permalink.

5 Responses to May the fours be with you